Having spent several years living and working around the world, Emma landed in Lithuania, where she now heads the Content division at Hostinger. We caught up with Emma to discuss her unexpected career trajectory, the challenges of leading an international team, and how to overcome cultural differences. 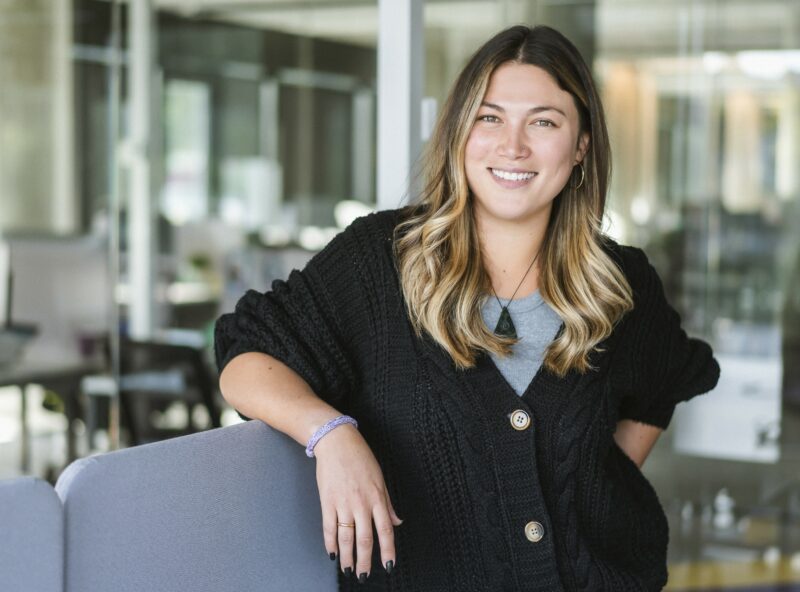 Picking mushrooms? Kayaking with random people? Sleeping in a tent on a frozen lake? Yes to all of it!

Tell us about your life before coming to Lithuania. You lived in a bunch of countries and have worked so many different jobs. What was it like for you?

I grew up in New Mexico, and after finishing my Strategic Marketing Communications degree, I got a job at an advertising firm, which I didn’t like because of its cutthroat, “say anything to get the client” nature. I lasted all of 6 months there. Upon quitting, I moved to South Korea and started teaching English there. I was 21 at the time. Moving was really easy for me because my mom is Korean, so I had no trouble getting a visa.

It was in South Korea that I met my husband. As chance would have it, he was also originally from the U.S., close to where I grew up. Together, we backpacked around Southeast Asia for a year and a half, and then went to Australia once we ran out of money. I worked at a hostel there, and later at Starbucks.

After that, we flew to New Zealand where I worked at a local branch of the same hostel and then at a skydiving outfit. There I did mostly video editing. To produce more videos, I started tinkering with scripts and coding, and soon realised that I loved it. This motivated me to start doing various free online coding courses.

Next stop was Mexico. I got a job as a yoga instructor and further polished my coding skills. While there I also started thinking about finally settling down somewhere and getting an education that I could actually do something with. I remembered seeing a book in New Zealand, called 101 Reasons to Visit the Baltics. I’m not exactly sure why, but I found Lithuania the most appealing, so I enrolled in a Cybersecurity programme at Vilnius University and soon after got a job at Hostinger. And here I am!

How did you end up at Hostinger? What has been your experience there?

Well, the position I applied to was Customer Success Agent, but during the last stage of the interview process I talked to a different HR person who asked me if I wanted to become an editor. I said that I was terrible at editing, but, to my own surprise, I did well on the test and got the job.

From there I’ve gone to training lead, writers lead, content lead, and have recently been promoted to Head of Content. So quite an unexpected trajectory – one that essentially brought me back to what I’ve learned in uni back in the U.S.! The difference, however, is that now I actually like my job. Writing all those blog posts and tutorials is a lot of fun because it’s challenging. Our job is to show that what might seem boring or difficult at first blush is actually quite interesting and easy. And the know-how that I’ve gained over years is really helpful in this regard.

Also, next semester I might be getting a cybersecurity internship, which would allow me to flex those muscles again. On the other hand, I really love my current job, so we’ll see. Maybe the whole cybersecurity detour was just a way for the universe to reignite my love for content and marketing!

Tell us a little bit about your team and how things have changed at Hostinger since you got there.

Things have changed quite a bit over these past 2.5 years. In the beginning, much of our writing staff was based in faraway Indonesia – we have a subsidiary there called Niagahoster – while editors were, for the most part, located in Lithuania. When I got the job, I was one of maybe 4 or 5 editors and we managed just a small team of writers. Today, we have 8 editors and 20+ writers. My own team currently has 50 or so people. And whereas, early on, most of our content was tutorials, now we also do blog posts, YouTube scripts, social media – pretty much all internal and external content.

What caught me off guard when I first joined was the cultural differences between the Lithuanian and the Indonesia teams. The Lithuanians, I thought, were nice, but also quite blunt. It took me a while to realise that it was more of a “say it like it is” kind of attitude. The Indonesians, on the other hand, were more delicate about wording things. So the first year was a lot of team-building and bridging that cultural gap. And now it’s awesome! Sometimes it even seems too good to be true!

What advice would you give to people interested in moving here, either permanently or temporarily?

The first thing for me was the weather. People at the office were telling me that it was going to be -30°C outside in the winter and that kinda freaked me out a little bit. In the end, however, it was pretty tame. I still had to get warmer clothing, though, as well as a happy lamp and some house plants to deal with the seasonal blues. And yet, when there’s snow, it’s really quite lovely.

Next up was the food. I’m used to eating lots of rice and spicy things, which aren’t part of the Lithuanian cuisine. I can easily wolf down, like, ten pounds of rice, but give me two potatoes and I’m done! But that was before, now I’m quite used to it. The main thing is to give it a try, even if it’s totally unfamiliar to you. I came to love things like cepelinai and that cold beet soup whose name I can’t pronounce. We actually have some in the fridge right now, so I’m gonna have it for lunch.

It also took me some time adjusting to the culture here. In the States we’re used to saying hi to everyone all the time. Here it’s not as common, so people would often come up to me and go, “Do I know you?”. Then again, despite the stoic manner in which they carry themselves, if you give them an “opening”, they’re very friendly.

Overall, I’d say it’s important to have an open mindset. Just say yes and take people up on their offers. Even when it’s something you’d never consider doing on your own. Picking mushrooms? Kayaking with random people? Sleeping in a tent on a frozen lake? Yes to all of it!